The study of the chakras begins with the root chakra, named Muladhara in Sanskrit.

The root chakra is located at the base of the spine at the tailbone in back, and the pubic bone in front. This energy center holds the basic needs for survival, security and safety and sexual expression. The root chakra is the foundation of energy, related with earth mother will provide us with the ability to be rooted into the earth plane and all our needs. 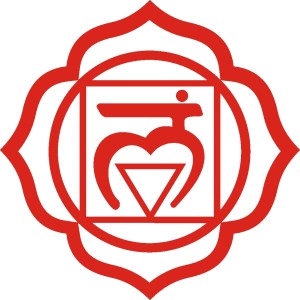 The energy to succeed in the material world comes from the first chakra therefore always that we find ourselves dealing with new business, new projects the root chakra will give us that boost we need in order to feel focus in our goals, the other way around, if this chakra is blocked we may feel fearful, Restlessness, Lack of energy, insecure and frustrated. 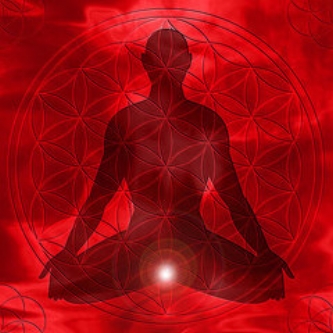 Root chakra body parts include the hips, legs, lower back and sexual organs.

The color for this chakra is red which is the color of the anger but also the vitality, life, strength and the physical nature of men. Rose-red is the color of Universal Harmony.

The note for this chakra is C and the mantra is lam or e as in red. Chanting these mantras in the key of D while focusing our attention on this area of our body can enable us to more consciously access the first chakra.

The astrological sign associated with the root chakra is Taurus. The symbol for Taurus is the bull. Like our root chakra, the bull is a symbol of masculine power and fertility.

The first chakra is actually the basis of both our masculine and feminine energy. It represents our masculine will and male sexual organs as well as the feminine energy of the Goddess Kundalini. Therefore, a man can learn to integrate his feminine power and a woman can learn to integrate her masculine power through the clearing and opening of this chakra. Said this, Male sexual organs are located primarily in his first chakra reason why male sexual energy is usually experienced primarily as physical, animal instinct, in order to have a sexual energy more emotional we have to balance it with the energy of the second chakra; Both chakras are associated with sexual energy.

There are four spokes, or petals. Four is the number of the square and foundations. The square is related to being honest, or giving a square deal, the four energies of earthearth, air, fire, and water, and the four directions. Four walls, four legs, or four wheels represent a strong foundation.

Update: I’m going to invite my friend Coco from Lust Massage London to write about the second Chakra

Want to join the discussion?
Feel free to contribute!